Remington and Laura are called in after a video game genius disappears with the plans to a new video game and five million dollars of company money. – from the DVD cover.

This is the first episode where I started seeing a bunch of people that I recognized from other TV shows and movies. Roxanne Hart from the weakest of the Oh, God! movies (Oh, God! You Devil), and the cult favorite Highlander. Peter Scolari, who had just appeared in Bosam Buddies with Tom Hanks, and before he was on Newhart.

All the old video game machines and posters really brought back childhood memories of hanging out at the arcade.

I really liked George Wallace’s character of Emory, the visiting executive, who Steele is supposed to be escorting to the airport but keeps getting dragged along for adventures. With the way they ended the episode, Emory announcing he was moving to LA to join the investigations team, it made for a great set up of a recurring character. I was a little disappointed that he wasn’t ever brought back for any other episodes, as I thought he provided a fine compliment to the other characters.

We do get a lovely shot of Steele romancing Laura in his apartment though. I like the episodes where they are chasing each other better then the later episodes when they are constantly fighting. The flirting is fun and light hearted, and makes for enjoyable viewing. 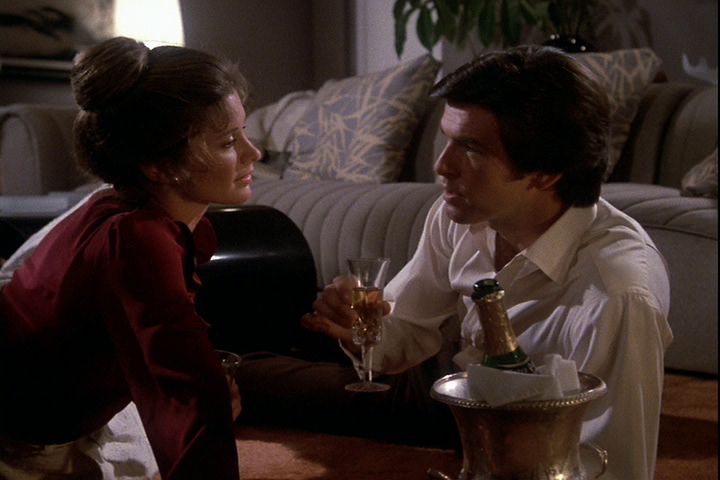 Moonlighting, another contemporary show, was much the same. And I felt the same way about it. The “will they, or won’t they?” theme is hard to keep interesting for years on end. So I can see why it changes throughout the run of the shows. It’s just that, in my view, the flirting is more fun and entertaining than the fighting.