11 25 2020 A BEAR ONLY HAS TO THINK IT IS CORNERED — Carl F. Worden — A NATION BEGUILED — The zombie apocalypse survival homestead

America, as a republic, is an idea. It’s a very powerful idea that isn’t bounded by marks on a map nor by the genetics of its inhabitants.

When a person rejects the idea of America as a republic, they are essentially saying they aren’t American. Enemies foreign and domestic is in our founding documents for a reason.

http://www.paulstramer.net/2020/11/a-bear-only-has-to-think-it-is-cornered.html Miscalculation:  A mistake in calculation or wrong calculation.   By Carl F. Worden A number of years ago, a group of three bow hunters were severely mauled by a large Black Bear.  They were badly injured but miraculously survived the attack.  The bear had no cubs with it.  In fact as it turns out, it… 11 […]

11 25 2020 A BEAR ONLY HAS TO THINK IT IS CORNERED — Carl F. Worden — A NATION BEGUILED — The zombie apocalypse survival homestead

All those lefties yammering on about class warfare and the plight of the poor and middle class? Yeah, they keep voting for the wrong guy. There’s a surprise for you. Though, I can see why the Never-Trumpers would be against him, he’s not filling their pockets like the swamp creatures did.

In 2019, the last non-Covid year, he presided over an average 3.7% unemployment rate and 4.7% wage growth among the lowest quartile of earners. All income brackets increased their take. That had happened in the last three Obama years, too. The difference is that in the Obama part of the boom the income of the top decile rose by 20 percent, with tiny gains for other groups. In the Trump economy, the distribution was different. Net worth of the top 10% rose only marginally, while that of all other groups vaulted ahead. In 2019, the share of overall earnings going to the bottom 90% of earners rose for the first time in a decade.”

END_OF_DOCUMENT_TOKEN_TO_BE_REPLACED

Originally posted on Calling-all-RushBabes: Groups who support our President Donald Trump will be holding a huge rally on November 14 in Washington, DC. ?Why have you not heard about it? ?Perhaps because Facebook, Twitter, and Eventbrite are censoring all accounts of this rally. ?Well, here at RushBabe49.com, we aren’t beholden to the Big Tech or… 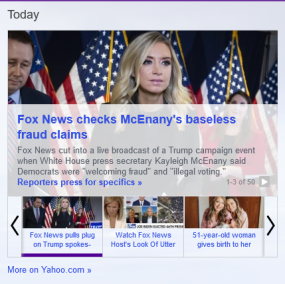 The main stream media is going all out making sure their chosen narrative is the only one seen by the public. Can’t find evidence if you refuse to look, making all claims baseless. The media doesn’t choose the winner, the electors do. They’re still counting and investigating things, there is no “President elect” at this point.

With the recent fuckery that took place in our national elections, and the ongoing legal battles taking place as a result, one half of this nation is going to look at whoever sits in the White House as being illegitimate. There are only two ways in which we move forward from here and be able to view our elections as fair again.

The first is civil war. The last time we had that, we killed more Americans than all of our other military engagements. In fact, the civil war accounts for roughly 48% of US casualties. I don’t want to go through that. I will if I have to, but that much suckage is not something I’m healthy enough to reasonably survive, and it’s going to leave my daughter with a hellscape to contend with.

The second is election reform. The only way to save the republic that is the USA is to have full faith in our electoral process as being fair and open. I have some ideas on how that could be done.

END_OF_DOCUMENT_TOKEN_TO_BE_REPLACED

the 2020 election: fuckery is afoot

END_OF_DOCUMENT_TOKEN_TO_BE_REPLACED

Not even pretending anymore

The Democrats aren’t even attempting to pretend at hiding their bullshit anymore. They updated their race in MI with nearly 140K new votes. But what they posted is a statistical impossibility. EVERY SINGLE ONE of those votes went for Biden.

There is no way in hell that many votes all broke for one candidate. The Dems will steal this election and we will end up in a shooting war if they’re not careful. I fear the republic is dead.