The complications of Covid-19 started hitting home last week in a couple of encounters.

My wife had a doctor visit in person at one of the local clinics. We were required to wear masks and they took our temps and oxygen saturation. That was reasonable. The nurse made me re-adjust my mask because it wasn’t fully covering my nose. It was covering my nostrils, but not the bridge of my nose. Considering that it left the bottom of my chin exposed to the point where I could open my mouth wide enough to get my bottom lip uncovered, and created large gaps on the sides that seemed pretty pointless.

But, it became ridiculous theater once we got inside the exam room. We were required to sit on opposite sides of the room for “social distancing”, even though we road in the same car together and sleep in the same bed inches apart. The nurse even moved my wife’s chair a few more inches away from the desk so that she’d be 6′ from her. That move created issues a couple of minutes later when she couldn’t get the blood pressure cuff (attached to the wall) over to where my wife was now sitting without moving the chair back.

This weekend I worked on fixing some leaks in my daughter’s pool. She has two of them actually. A 10′ one that she’s been using the last few years that I fixed one leak in the side earlier this summer but was still leaking slowly out of the bottom someplace which I had to take down in order to find and fix. And a smaller 8′ one that I put up while the 10′ one is being fixed. But I had to fix a hole in the air ring around the top of the 8′ one before she could use it. Anyway, we started looking on line to see about replacing these. We paid about $50-$60 a few years ago when we bought them, but now they want $300-$400 for them. And the 12 pack of filters I bought for the pump for $25 they now want over $140 for. My best guess is that most of this stuff was coming from China and is now hard to get because of trade relations going downhill. I guess I’ll just keep patching these for awhile. 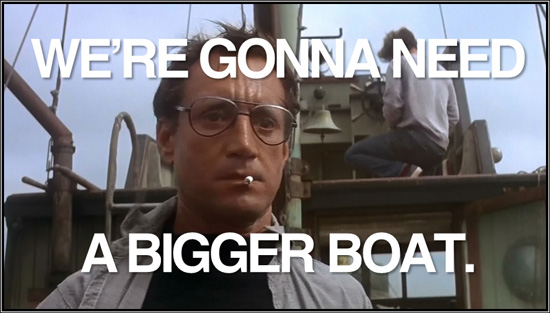 Tomorrow, June 20th, will be the 45th anniversary of the release of the movie Jaws. I did not see it in the theater. I may be old, but I was only 3 at the time. My first memories of this iconic movie are watching it on the TV at my grandparents, likely as one of the Sunday Night Movies one of the channels had when I was about 8 or 9. It was scary (Dreyfuss peering in the sunken boat kinda got me), but the shark seemed so unlifelike that it wasn’t overly scary. No, the scary part was several years later.

END_OF_DOCUMENT_TOKEN_TO_BE_REPLACED

Cart, meet Horse. I’m not sure which of you goes where. /s

END_OF_DOCUMENT_TOKEN_TO_BE_REPLACED

We the people of the United States, in order to form a more perfect union, establish justice, insure domestic tranquility, provide for the common defense, promote the general welfare, and secure the blessings of liberty to ourselves and our posterity, do ordain and establish this Constitution for the United States of America.

That’s the preamble to the US Constitution, one of our founding documents. And the document that gives us the form, structure and limitations of our republican form of government.

Unfortunately, it looks like our modern protesters and their enablers haven’t given much thought to that phrase. In their insistence that all inconvenient history be wiped from public view by the removing of statues and renaming of lakes, buildings and institutions they appear to think that our forefathers thought they had created an utopia for themselves. My view is that they understood utopia was unachievable, but that they were working for something better than they had before. And they gave us a framework to change our laws and the structure of our government to make future improvements. It doesn’t say A perfect union, but rather “a more perfect union.” There were things they argued over incessantly, trying to hammer out a compromise. We can see that in the documents of The Federalist Papers and The Anti-Federalist Papers. They were striving for better, not perfect. END_OF_DOCUMENT_TOKEN_TO_BE_REPLACED

Companies that make editorial changes/statements should not be allowed to hide behind the lie that they aren’t being discriminatory.

In February of 2009, Eric H. Holder Jr., Mr. Obama’s Attorney General (no doubt borrowing a phrase from pro-Second-Amendment activist Jeff Snyder) called the United States “a nation of cowards” on the grounds that there is an insufficient dialog on race issues, apparently on the theory that no honest nor legitimate reason can exist for…

We went to church yesterday for the first time in quite awhile. It was held outside in the parking lot so everyone could “social distance” as they liked, or sit in the vehicles and listen on the radio. Weather wise the biggest problem was the heat and humidity. It was about 96 degrees out yet and humid from the previous night’s thunderstorm that rolled through. Unfortunately I felt a profound disconnect between what was being said and what the reality is.

The minister spoke about the recent unrest around the country, and specifically here in Fargo. He spoke about his “white privilege” and “systemic racism” as well as a couple of other things like “listening to the other side”, trying to tie it into his chosen verse, James 3:13-18.

So, that is actually a pretty decent passage relatable to current events. (I took this from the little pocket bible I carry around in my backpack, even though it’s not the bible I typically use for church now or what I grew up with. It’s a handy size, so that’s why I picked it up.) It talks about making peace and some of what it takes to make that peace and for it to last.

END_OF_DOCUMENT_TOKEN_TO_BE_REPLACED

My ‘Privilege’ comes from my culture, not my skin tone

A blast from the past that seems relevant now

Sarah Hoyt posted on FaceBook about the twitter comment about ‘White Privilege’ that MSNBC commentator Toure made in response to a tweet about him recommending a piece in The Atlantic about reparations. This got me thinking what ‘White Privilege’ means, reparations, class and work ethic. Go back and read the links and the comments for background while I try to make my thoughts here coherent.

Coates article was about how he came to support the idea of reparations. While I don’t have a problem with reparations paid to victims, the time for such action would have been over a century ago when there were still victims around. Doing so now, 150 after the Civil War, would involve monumental problems. 1) There are no surviving former slaves from antebellum South. I doubt there are any surviving children of former slaves, though if there are you can probably count them all on…

Fargo had another “protest” today. After “negotiations” between the city and the protest organizers (who had “demands”? WTF?) it became a “Family Fun Day” at Island Park. Things went well and were peaceful. I don’t know if the deputy chief (now resigned) who put himself undercover last weekend without telling anyone beforehand actually ended up showing up. You know you’re either doing something really right, or really wrong when <b>everyone</b> is pissed off at you. In his case, it was quite obviously really, really wrong.

Social media rumours were flying fast and furious. One which made the news was of pallets of bricks being left around town. This one had me concerned, as there was potential to do great harm to people and property. Luckily it appears to be false. I spoke to one of the Fargo PD officers this evening and he said of the three sites he had been dispatched to today, all three were active construction sites. In other words, people freaked out about pallets of bricks that were being used.

Another rumour I heard about construction sites was that people were going to be showing up to burn things down. One of the companies has apparently rented a bunch of generators and lights so that his guys can keep an eye on things tonight. No idea if that one is true, but the site is outside of our jurisdiction anyway so I don’t understand why some of the leaders around here were worried (other than the guy who owns the construction company is a huge donor).

I’ve been keeping an eye on things via the cameras, and all of my officers are out patrolling in marked squads. So far, everything is normal. I’m hoping it stays that way.

MaddMedic, I’m off this weekend if you happen to be around.

A brief primer on Federalism.

My readers from outside the US (and maybe some in the US) are probably scratching their heads in puzzlement at the US political scene as displayed this spring and early summer. The president has left so many things to the states, all of which responded in slightly different ways, that it makes the US look somewhere between chaotic and insane. The President of France or Prime Minister of Russia would never allow this.

Welcome to Federalism. Germany has a little, although not as much as the US does. It is written into the Constitution, especially the Constitution before the Progressive Era reforms of the 1890s-1920s. The US has, in theory, two tiers of government. The federal government does federal things and the states do state things. Each level is a check on the other, or was, and this fits in with the three branches of the federal government.