Laura and Remington find themselves in danger on a remote tropical island when they investigate the sudden suicide of a prospective client. – from the DVD case.

Another great, memorable episode from season 1. Laura and Remington show up at a plastic surgeon’s office just in time to hear him shoot himself. On the desk is an invite to an island retreat, supposedly reminiscent of the Playboy Mansion I guess, just on a grander scale.

Once they get ferried to the island by helicopter Laura says she thinks she should use an alias and would like to be called Tracy Lord, but Steele introduces her by another name. 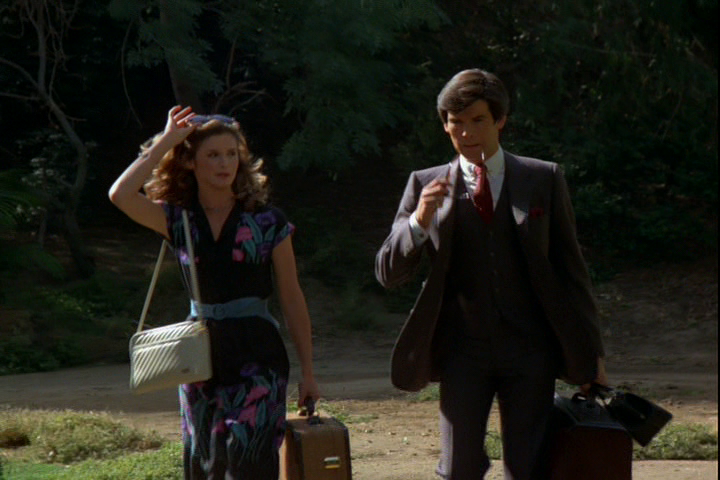 The basis of the episode is And Then There Were None. Steele suggests they run with that and have Laura, AKA: Myrtle, fake her death. Unfortunately someone else knows the story as well. Hence we get the iconic title sequence scene of Laura rolling over just before a bullet rips into her pillow.

She appears in her negligee a couple of times in the episode, giving us peeks at her lovely form. 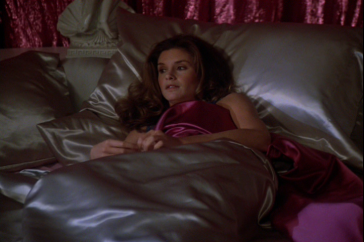 They do eventually catch the killer. One of the actresses, Lynne Randall, later returns to the series playing another role for a couple of episodes. One reason might be because she was the wife of executive producer, Michael Gleason. Of the ladies who appeared in this episode, Zimbalist was the most beautiful. They all seemed a little over-the-hill for porn models. Diane Stillwell was the best looking of the ‘girls’ working for the magazine/staying on the island, and she was almost 30. Lynne Randall was nearly 40, and Brandis Kemp was in her early 30s. Thats not exactly The Girls Next Door.