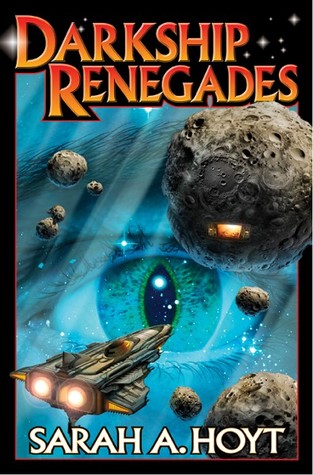 Entry number two in Sarah A. Hoyt’s rollicking and popular Darkship series, sequel to Darkship Thieves,and winner of the Prometheus Award. After rescuing her star pilot husband and discovering the dark secret of her own past on Earth, Athena Hera Sinistra returns to space habitat Eden to start life anew.  Not happening.  Thena and  Kit are placed under arrest for the crime of coming back alive.  The only escape from a death sentence: return to Earth and bring back the lost method for creating the Powertrees, the energy source of both Eden and Earth whose technological origins have been lost to war.  But that mission is secondary to a greater imperative.  Above all else, Thena must not get caught.  If she does, then suicide is to be the only option.

With the odds heavily stacked against not only success, but survival, Thena comes to understand what her cynical accusers do not: it is not merely one woman’s life on the line anymore. For it’s on Earth where the adventure truly begins. Thena realizes that what is truly at stake is the fate of Eden and Earth alike, the continuance of the darkship fleet–and freedom for all in the Solar system–and beyond.

A wonderful story of beating the odds and battling tyrants. Thena is a wonderful character. Not quite as ‘fly off the handle’ as in the previous book, she still doesn’t always quite think things fully through before committing herself to action. For some reason I always envision her as a young version of Beautiful But Evil Space Princess, though without the accent. We got much more insight into the Jarl Ingemar character. Kit didn’t get much screen time, nor did Zen (I think Zen could be a character greatly expanded, possibly even into her own novel). But seeing a little more background into the history of the mules.

This story was pretty fast paced and coherent. But I couldn’t help thinking there should have been more going on. It was fairly narrow in scope. A Few Good Men I think will be an excellent companion to this novel and I am rather looking forward to reading it.

The eBook was formatted well with no obvious spelling/grammatical errors.