This is my review of Descendants 2 the Junior Novel 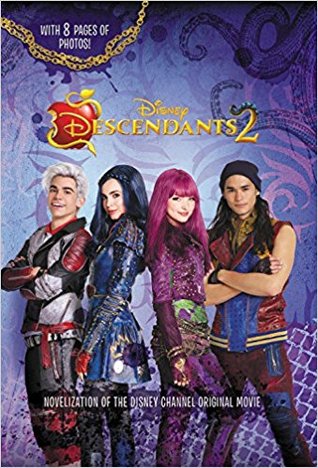 Mal, Evie, Carlos, and Jay may be the children of terrible villains, but they’re fitting in amazingly well on Auradon.
Well, at least most of them are.

For Mal, the pressure to be royally perfect is too intense, so she returns to her rotten roots on the Isle of the Lost. But Mal soon finds that her archenemy, Uma, the daughter of Ursula, has taken her spot as self-proclaimed Princess of Evil. Even worse, Uma has a plan to destroy Auradon-and a gnarly gang of pirates to back her up!

It’s a classic battle between wicked and evil . . . and these kids are made for trouble.

I read this with my daughter, a chapter or two a night. She loved it. I was more, “Meh.” It was almost verbatim what was in the show. For a kid it’s an OK book.

About the only thing I can think of that was different was a scene where Harry and Gil kissed in the book. I could have done without the gay kiss, but otherwise there isn’t anything risque. When I read it to my first grader, I just skipped that sentence. It doesn’t add anything to the story, so I’m unsure why it’s even there except as some sort of diversity virtue signalling, which isn’t necessary in a book aimed at kids.

The story line flowed along at a nice quick pace. Being a kids book, it was easy enough to read. Mal was the only character who was developed much. Each chapter was introduced as an entry of Mal’s diary.

The book was for formatted well enough. For some reason each of the pages was tinted, particularly around the edges. It didn’t interfere with the reading, but seemed unnecessary. There were no obvious spelling/grammatical errors in the paperback edition.