Just because something is legal, doesn’t mean it’s moral. There is an easy way to keep from “completely destroying my life“, and it’s to behave in a manner that fits with the community. Sometimes the community expectations need to change (such as the civil rights movement), but sometimes it’s the individual responsible for the behavior that needs to change his ways. Kirk Ludwig falls into the latter category.

On July 13 Kirk Ludwig was sighted by a citizen taking photos at the pool downtown in Fargo. Now, this isn’t illegal, but it is suspicious when he’s trying to do it surreptitiously. A professional photographer would understand that acting suspiciously, especially around areas where kids are, is not something that you do if you want to keep shooting in the area. A true professional would gone to the park district offices and notified them of what he intended to do.

This isn’t the first time he’s been spotted doing something similar in the park. I’m not sure when this photo was originally taken or posted, it may be the post spoken about in this July 14 article.

He’s been trespassed from other properties.

And he’s apparently been caught doing similar stuff other places. I believe Wylie Park is in Aberdeen, SD. 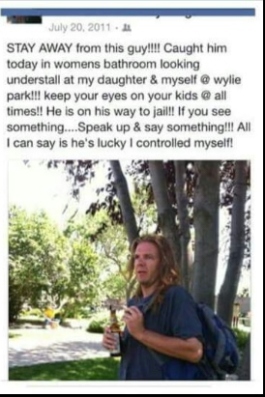 When you are continually caught creeping on young women and kids, it’s not the publicity that’s destroying your life, it’s you. Quit acting like a douche nozzle and people will quit treating you like one.

In his interview with The Forum, Ludwig said he practices “candid street photography,” in which subjects do not know they are being photographed. He said he “learned a hard lesson” this week.

“What might be OK and normal behavior in a big city is just interpreted as weird and creepy in a small city,” he said.

Ludwig said he likes shooting all sorts of subjects, he said, including landscapes and buildings. But he has another, more unusual interest: expression photography.

He finds a subject – someone in public who does not notice him – and points his camera at the person.

“I wait for them to see me, and then I take the shot,” he said. “I do want to be seen eventually. That’s pretty much the only picture that’s of value to me, is the one when they see me.”