My review of the The Judas Pair by Jonathan Gash 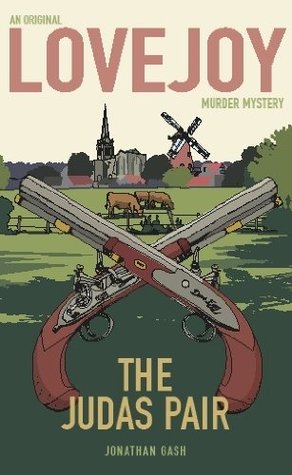 Lovejoy knows that the legendary Judas Pair of flintlock pistols are just that–a legend. Or are they? By the time he finds out the truth, two people are dead, and Lovejoy has to pull a nifty scam to avoid the same fate.

I love the character of Lovejoy, flawed as he is. He’s the only really well developed character, though there were no badly written ones. The police investigations seemed a trifle inadequate, but it helps keep the story moving. The pace of the story was quick and it was enjoyable. There is lots of slang to sort through, but most of it is pretty obvious. Quite a bit of information on antiques, though I have no way of knowing how accurate it might be.

I forgot what a cad Lovejoy is. I read these stories 25-30 years ago and remembered basic plot points but not the particulars. I knew he didn’t treat his girlfriends all that well, but not that he slugged the one because she was talking while he was on the phone. I also didn’t remember her later working on his poor car. I thought the murderer fairly obvious, but that might just be because I read it before. Lovejoy’s development/change of character as events progress was rather drastic, but well within the realm of story. Though written decades ago, it didn’t seem all that dated. Suspension of disbelief was not a problem, I very much enjoyed the story.

The eBook was formatted well with only a couple of minor spelling errors.

One thought on “The Judas Pair”